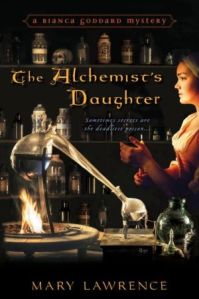 I received this ebook from NetGalley and Kensington in exchange for an honest review.

In the year 1543, Bianca Goddard is a chemist who uses her knowledge of medicinal herbs and plants to help the poor in a disease-ridden slum of London. Shortly after her friend Jolyn comes to her complaining of stomach pain, she dies, and Bianca is suspected of killing her. Since the constable is already convinced of her guilt, it’s up to Bianca to clear her own name, before she’s sent to the gallows.

The Alchemist’s Daughter graphically depicts the living conditions of the poor during the Tudor period. This is no fanciful or romantic rendering of King Henry VIII’s England. Life is so desperate that those without money will do anything to survive, including using other people to get ahead. These were the days where work consisted of prostitution, muckraking, and rat-catching. And the law was more interested in what was easy and convenient, rather than the truth. This is what young Bianca faces, even as she works to live down the infamy of her father, who at one time, was accused of attempting to poison the King. Conditions are so poor, she lives in one room, which is also where she mixes up her concotions. In addition to being unsanitary despite her best intentions, it also has the potential to be extremely unsafe. This is made clear when her friend Jolyn dies after Bianca gives her an herbal tea to soothe her stomach. At first even Bianca is afraid that she may have mixed up the ingredients and inadvertently poisoned her friend. Once it is clear however that Jolyn was poisoned before her visit, Bianca determinedly sets out to discover who the true villain is. This is made somewhat difficult by an inept constable who is more interested in using Bianca to further his career. Also getting in the way at times is Bianca’s beau, John. While he comes through in the end, during much of the story, he’s rather immature and seems more upset over Bianca’s perceived inattention, than the looming threat of her being hung. Bianca herself, is an intriguing character. It is thanks to her efforts that her father is free, and she’s managed to carve out an independent life during a time when it would have been far easier for her to just wed. The mystery is very well written, with plenty of twists and no end of potential suspects. Despite the prevalence of historical slang, I found this to be a fairly quick read. Mary Lawrence has obviously done her research as everything is consistent with the times. In keeping with that, there are some pretty squeamish passages, which may give one pause. That said, I think this is solid introduction to a new series, and those who enjoy historical mysteries will be pleased.

23 thoughts on “The Alchemist’s Daughter ~ By Mary Lawrence 4.0 Stars”