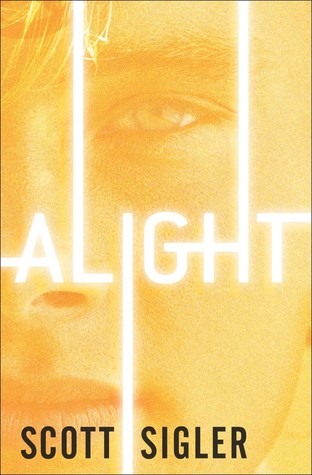 Thank you NetGalley and Del Rey for providing an e-Arc in exchange for an honest review.

Synopsis: Alight reveals to readers the further adventures of Em, Spingate, O’Malley, Bishop, and the other young heroes introduced in Alive. In Alive, Em fought to assert herself as leader and her friends tried to comprehend their own mysterious identity; now she must wrestle not only with the challenge of winning power but the grave responsibility of having assumed it, and she and her friends must contend with a grim fact: the revelation of their identity is not an answer but another question–and one with terrifying implications.

So often the second book in a trilogy or series suffers from the dreaded “middle book syndrome”, but that’s definitely not the case with Alight. Picking up exactly where Alive left off, the “Birthday Children” have made it down to the planet Omeyocan. In addition to trying to find food, water, and shelter, Em and the other teens must deal with the other inhabitants of this planet and discover who is friend and who is foe. As in the first book, Em does her best to be a strong and responsible leader, yet once again is besieged on all sides as a zealot within her ranks attempts to take control and convert followers to the bloodthirsty god he worships. Em is also fighting her own feelings of fear, paranoia, and anger through much of the story which further complicates things. There are so many themes here which can apply to today’s current events including: xenophobia, religious fanaticism and mistrust of those in power. Given what’s going on in the world right now these are things that both teens and adult can relate to. What I really loved about this book though, is that Scott Sigler does such a fantastic job not only further developing the characters of Em and her crew and looking at how they’re dealing with the revelations from the previous book as well as the continuing repercussions, but how he seamlessly adds in new layers with the planet Omeyocan and it’s inhabitants. There is just so much going on, the story could have easily gotten bogged down in the myriad of details, yet from the very first page, the action takes off and keeps going until the book’s exciting conclusion. While the ending is definitely a cliffhanger, thankfully the third novel Alone is coming out in October. Anyone who is a fan of dystopian science fiction should definitely give the Generations Trilogy a try.