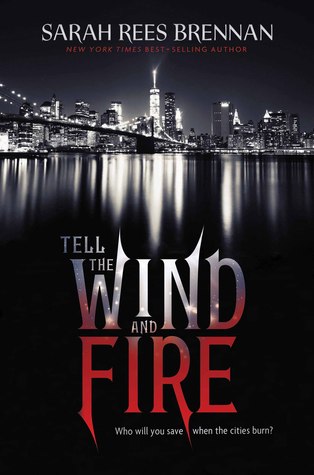 Thank you NetGalley and Clarion Books for providing an e-Arc in exchange for an honest review.

Synopsis: In a city divided between opulent luxury in the Light and fierce privations in the Dark, a determined young woman survives by guarding her secrets.

Lucie Manette was born in the Dark half of the city, but careful manipulations won her a home in the Light, celebrity status, and a rich, loving boyfriend. Now she just wants to keep her head down, but her boyfriend has a dark secret of his own–one involving an apparent stranger who is destitute and despised. Lucie alone knows the young men’s deadly connection, and even as the knowledge leads her to make a grave mistake, she can trust no one with the truth.

Blood and secrets alike spill out when the revolution erupts. With both halves of the city burning, and mercy nowhere to be found, can Lucie save either boy–or herself?

A Tale of Two Cities has always been one of my favorite Charles Dickens stories, so when I heard that Tell The Wind And Fire was going to be based on the classic I was quite excited. Adding to my enthusiasm was that I really enjoyed Sarah Rees Brennan’s Lynburn Legacy and Demon’s Lexicon trilogies. After finishing this however it was hard to believe the book was by the same author. The first problem are the characters.The story is narrated by Lucie who has loved Ethan since the day they met. She’s completely devoted to him and we’re told repeatedly and nauseatingly throughout the story how perfect he is. But the real problem I had with Lucie is that she’s got no personality of her own. She’s wishy-washy in the extreme and has no backbone until the very end of the book. She has opportunity after opportunity to take a stand for what’s right, yet until the last few chapters she prefers to cower and make excuses for why she can’t act. Ethan is likable, but as a hero he’s pretty bland. He reminded me of the princes in Disney movies like Cinderella, and Snow White. They’re handsome and charming, but there’s nothing really there under the surface. The one character I liked was Carwyn who adds some much needed humor and bite to the story. Given the story that this is based on, naturally there’s a love triangle but I was expecting this. The problem is I disliked Lucie so much that I wanted both Ethan and Carwyn to dump her and go get a drink together. I just couldn’t fathom how she could inspire such love in either of them. The other issue I had was with the world-building. The author throws an enormous amount of information about the world she’s created in the first three chapters. It’s extremely confusing and there are so many things that are never explained such as how magic was actually discovered.  The world just transforms magically without answering any questions such as where the magic came from to begin with. I was still muddled at the end of the book. I don’t even understand where the title comes from beyond that it’s part of a nursery rhyme Lucie’s aunt used to sing to her. I’ve given this 2 stars mainly because I really liked Carwyn. Otherwise, try as I might, I just can’t find much to recommend about it.