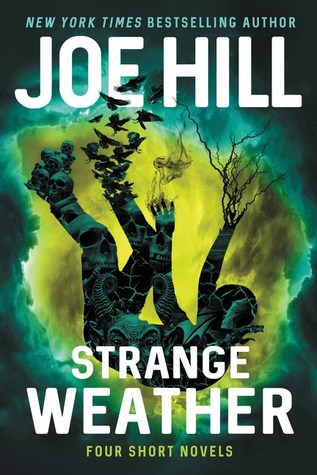 Thanks to Edelweiss and William Morrow for providing an eARC in exchange for an honest review.

“Snapshot” is the story of a Silicon Valley adolescent who finds himself threatened by “The Phoenician” a tattooed thug who possesses a Polaroid Instant Camera that erases memories snap by snap.

A young man man takes to the skies to experience his firs parachute jump…and winds up a castaway on an impossibly solid cloud, a Prospero’s island of roiling vapor that seems to have a mind of its own in “Aloft”.

On a seemingly ordinary day in Boulder, Colorado, the clouds open up in a downpour of nails—splinters of bright crystal that shred the skin of anyone not safely under cover. “Rain” explores this escalating apocalyptic event, as the deluge of nails spreads out across the country and around the world.

In “Loaded”, a mall security guard in a coastal Florida town courageously stops a mass shooting and becomes a hero to the modern gun rights movement. But under the glare of the spotlights, his story begins to unravel, taking his sanity with it. When an out-of-control summer blaze approaches the town, he will reach for his gun again and embark on one last day of reckoning.

Strange Weather is an eclectic collection of four tales which only has one theme connecting them, the weather. And this really only plays a major role in the last story, but it honestly doesn’t matter because Joe Hill’s writing is so brilliant.

Snapshot features a monstrous villain known as The Phoenician who stalks his victims with an instant camera which extracts their memories. The only one who can stop him is an eleven-year-old misfit. It’s a vintage horror story and somewhat reminiscent of Hill’s NOS4A2. I would say that out of the four stories, this was my favorite because I have a fondness for underdog kids battling evil. I give this 5 Stars.

Loaded tackles the horror of gun violence, and it a story that Hill has been mulling over in his mind since the Newtown massacre. Here, the shooter, Randall Kelloway, is a mall cop who’s been rejected numerous times from the police force because he’s psychologically unfit. He’s a gun fanatic who illegally carries one to work, which results in tragedy. Aisha is a reporter who has her own tragic history with gun violence. She’s suspicious of Randall’s account of what happened, and is determined to discover the truth. It’s a tough story to read and the ending ripped my heart out. Rather than being supernatural in nature, instead the story focuses on the real life monsters among us. I did think this went on a little too long which is why I’m giving this 4.5 Stars.

Aloft is quite different from Hill’s usual writing. It focuses on twenty-something Aubrey Griffin, who along with a small group are completing things on their friend June’s bucket list, that she was unable to do before her death from cancer. The first is a parachute jump, and Aubrey is panic-stricken, but he’s trying to impress his friend Harriet. Once they’re in the plane though, he finds he just can’t go through with it. That is until, the plane starts to lose power and everyone is forced to jump. Aubrey lands on this strange looking cloud. And of course this is not your average cloud. This isn’t a horror story per se, but instead, a quirky, poignant and thoughtful exploration of unrequited love and the question of whether it’s truly possible to have everything you want. There are some questions as to who and what the cloud is, and where did it come from, so I’m giving this 4.5 Stars.

Rain is the last story and is very reminiscent of some of Hill’s more post-apocalyptic fiction. The rain arrives in the form of crystalline needles that are capable of penetrating both objects and bodies. The heroine here is the kick-ass Honeysuckle Speck, and the journey follows her as she tries to get from Boulder to Denver to tell the father of her girlfriend and his wife’s deaths. In addition to trying to avoid further deadly outbreaks of rain, Honeysuckle also has a murderous doomsday cult after her. It’s a well-written story and the perfect way to end this anthology. I give this 5 Stars.

Strange Weather confirms why I’m such a fan of Joe Hill. Every story has characters that readers will connect with. Diverging from his more epic horror like last year’s The Fireman, this is more in keeping with his other short story collection, 20th Century Ghosts. I believe this quite literally has something for everyone and I HIGHLY recommend it to both long-time fans of Hill’s as well as new readers.