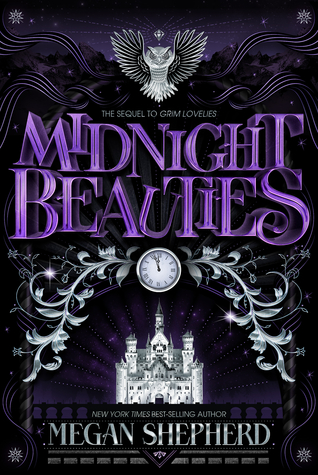 Thanks to NetGalley and HMH Books for Young Readers for providing an eARC in exchange for an honest review.

Ever since she discovered her affinity for magic, seventeen-year-old Anouk has been desperate to become a witch. It’s the only way to save her friends who, like Anouk, are beasties: animals enchanted into humans. But unlike Anouk, the other beasties didn’t make it out of the battle at Montelimar in one piece.

With her friends now trapped in their animal forms, Anouk is forced into a sinister deal involving a political marriage with her sworn enemy, a wicked plot to overthrow London’s fiercest coven of witches, and a deadly trial by fire to become a witch. The price for power has always been steep in the world of the Haute. Now it will cost Anouk everything. Wicked and delightful, this spellbinding sequel to a Grim Lovelies is perfect for fans of The Cruel Prince and The Hazel Wood.

Grim Lovelies introduced Megan Sheperd’s latest foray into the whimsical yet creepy, and I quite enjoyed it. While I don’t think Midnight Beauties is quite as good, I still had fun reading it.

The best part of this duology is the world building which is utterly fantastic. Paris is one of my favorite places even though I’ve never visited, so to have that as the setting and then throw one of the most original magic systems I’ve come across in there, made me an instant fan. One Sheperd’s biggest strengths is her ability to bring her worlds to life and suck her readers into them, and once again that’s exactly what she does here. However, one of the issues I have with this conclusion is that she adds a lot more rules to the magic and at times it’s a bit too much and interrupts the flow of the story.

I like Anouk even more in Beauties then I did in the previous book, as I think her character development grows exponentially. Unfortunately, I can’t say the same for the other characters. Ones who I grew to like in Grim Lovelies, fade into the background, and there are too many new ones introduced that I felt didn’t contribute to the story.

I have to be honest and say I struggled with the rating. I kept going back and forth between 3.5 – 4.0 stars (even while writing this review), before finally settling on the higher mark. Despite my issues, the world building is phenomenal and Sheperd’s writing so beautifully evocative, that for me, I can forgive the few problems I encountered. I wish she had decided to make this a trilogy instead though, because I think that might have solved just about everything, including the somewhat rushed ending. Overall, I do think Midnight Beauties is a satisfying finish to the Grim Lovelies duology and I think it will please her legions of fans.

John Liming Is An Opinion Writer At Large

Wrapped around genres and my overthinking brain💤

John Liming Is An Opinion Writer At Large

Wrapped around genres and my overthinking brain💤