This lovely video that Sally has shared is a timely reminder that yes, goodness still does exist out there.

Thanks to NetGalley and Grand Central Publishing for providing an eARC in exchange for an honest review.

Synopsis: Following the acclaimed debut of Old Bones, this second “happily anticipated” new thriller in Preston & Child’s new series, features Nora Kelly, archaeologist at the Santa Fe Archaeological Institute, and rookie FBI agent Corrie Swanson as they work together to solve a twisted crime that reaches far beyond any of their worst fears. (Booklist).

A mummified corpse, over half a century old, is found in the cellar of an abandoned building in a remote New Mexico ghost town. Corrie is assigned what seems to her a throwaway case: to ID the body and determine cause of death. She brings archaeologist Nora Kelly to excavate the body and lend her expertise to the investigation, and together they uncover something unexpected and shocking: the deceased apparently died in agony, in a fetal position, skin coming off in sheets, with a rictus of horror frozen on his face.

When they at last identify the body—and the bizarre cause of death—Corrie and Nora open the door into a terrifying, secret world of ancient treasure and modern obsession: a world centered on arguably the most defining, frightening, and transformative moment in American history.

Scorpion’s Tail is the second book in Preston & Child’s Nora Kelly spin-off series and while I didn’t like it quite as much as last year’s Old Bones, I’m still looking forward to future books featuring Nora and Corrie.

As always, the research Preston and Child put into this story is meticulous, but there seemed to be something missing here that I’m not sure I can put my finger on. I liked the historical mystery behind this, but perhaps due to the length of the book, I found my attention wandering more than once. Also, while both women have been recurring characters in the Pendergast series, Nora Kelly is much more relatable. Corrie Swanson is in her early twenties, yet strikes me as an old soul. I like her, and find her intriguing, yet I’m frustrated by her at the same time because she has a remote personality that makes it difficult to connect with. I’m hoping to see her character develop as she and Nora work more cases together. And finally, (here’s my one spoiler), while I enjoyed Pendergast’s cameo at the end of the previous book, this time I found it unwarranted and a bit annoying.

While The Scorpion’s Tail is not my favorite story from Preston and Child, it’s still a worthwhile read. And to be honest, I’ve been reading their books since the 90s, and have extremely high expectations for each new entry. If any of you are fans I’d love to know your thoughts about this once you’ve read it.

Amazon, “The Show Must Go On”, Heartwarming Holiday Commercials

‘Tis the season for Christmas Commercials, and as I did last year, over the next few weeks I’ll be sharing some of my favorites from this year. To kick things off here’s “The Show Must Go On,” from Amazon.

Dane Callstrom, I’ll Be Back: A Trump Hamilton Parody

Thanks to NetGalley and Sourcebooks Fire for providing an eARC in exchange for an honest review.

Project Runway goes to Comic Con in an epic queer love story about creativity, passion, and finding the courage to be your most authentic self.

Raffy has a passion for bedazzling. Not just bedazzling but sewing, stitching, draping, pattern making—for creation. He’s always chosen his art over everything—and everyone—else and is determined to make his mark at this year’s biggest cosplay competition. If we can wow there, it could lead to sponsorship, then art school, and finally earning real respect for his work. There’s only one small problem…Raffy’s ex-boyfriend, Luca, is his main competition.

Raffy tried to make it work with Luca. They almost made the perfect team last year after serendipitously in the rhinestone aisle at the local craft store—or at least Raffy thought they did. But Luca’s insecurities and Raffy’s insistence on crafting caused their relationship to crash and burn. Now Raffy is after the perfect comeback, one that Luca can’t ruin.

But when Raffy is forced to partner with Luca on his most ambitious build yet, he’ll have to juggle unresolved feelings for the boy who broke his heart and his own intense self-doubt, to get everything he’s ever wanted: choosing his art, his way. 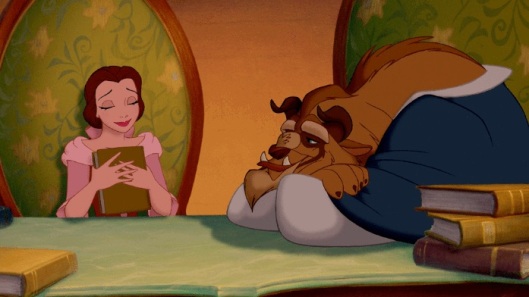 What can I say? Some kids do drugs. Some kids start fires. I embroider in the dead of night, for the attention of strangers.

Raffy is a seventeen-year-old misfit who you just can’t help falling in love with. While his artist mother, Evie, has no issues with him being gay, she is horrified at his proclivity for crafting and cosplay, feeling it’s completely beneath him. There are some genuinely funny moments between them, but underneath that is an intriguing layer of familial discord. On the surface, Luca is an all American jock, yet he’s so desperate not to let down his parents, he keeps his sexuality a secret from them. There’s a sweet odd couple chemistry between both boys, and the chapters alternate between present day and the past which details how they met, and what led to their initial breakup. The supporting cast is wonderfully fleshed out, and the main setting of a Comic-Con adds to the fun. Be Dazzled is a delightful, heartwarming love story, that’s screaming to be adapted to film. If you’re looking for a book that will charm your socks off I can’t recommend highly enough, particularly to fans of books like Simon vs the Homo Sapiens Agenda.

This is the song I didn’t know I was missing!

Like every other 2020 holiday, this Thanksgiving will be like no other. I hope everyone has a safe and happy holiday, and keep in mind, this is just one year. 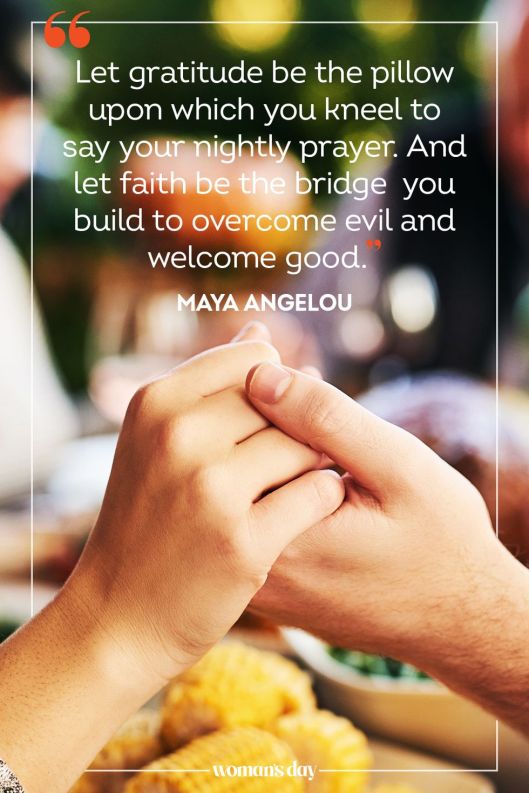 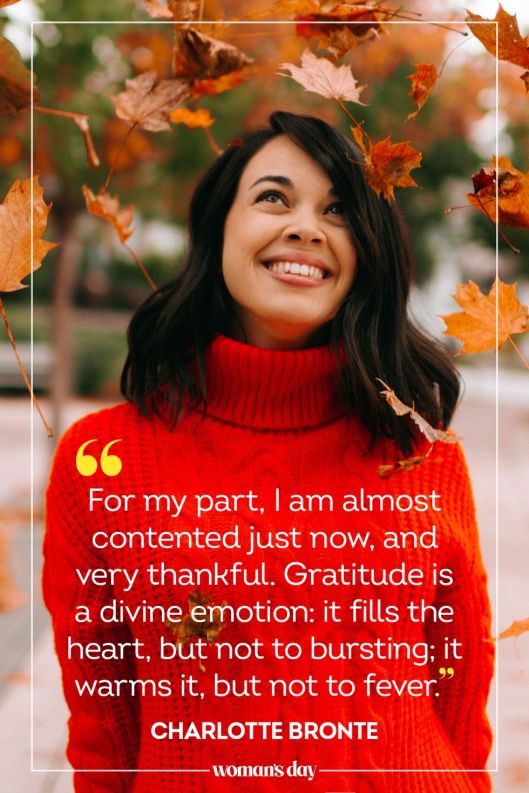 As the current occupant of the White House continues to petulantly and fraudulently claim that the election was “rigged,” and implement a scorched earth policy during his weeks left as a lame duck president, President-elect Biden gave a sober and compassionate pre-Thanksgiving speech where he reminded everyone that “…we’re at war with the virus, not each other.” The contrast between these two men has never been clearer. In case you missed Biden’s address, here it is:

Humor, On the Lighter Side, Turkey Memes 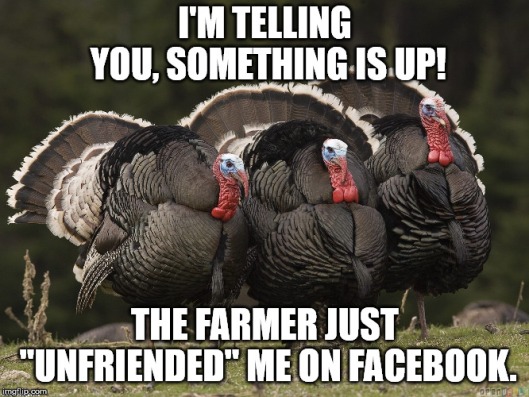 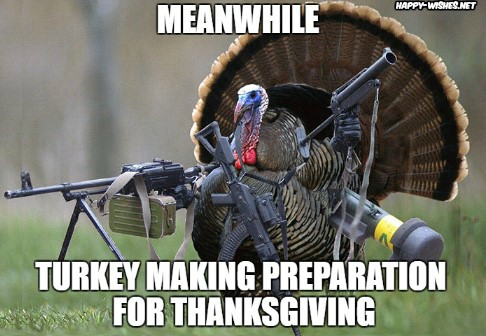 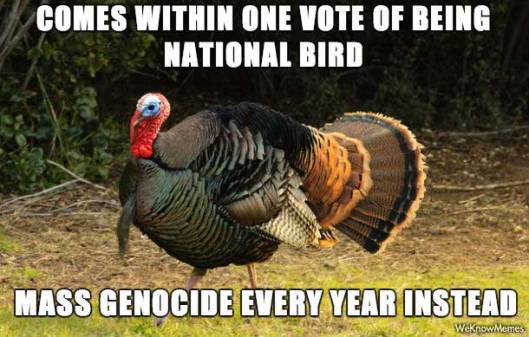 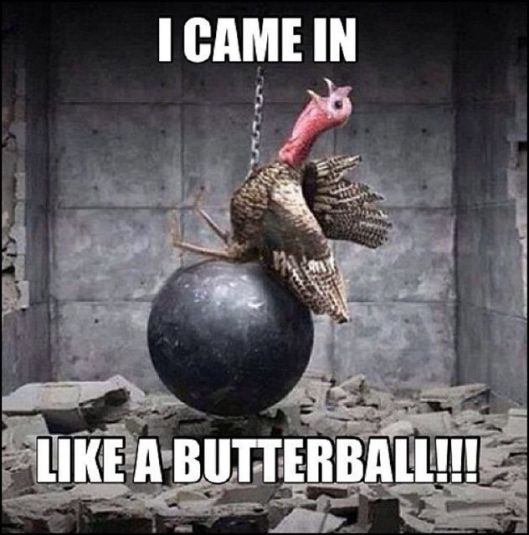