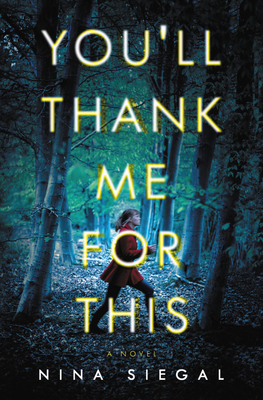 Thanks to NetGalley and Mulholland Books for providing an eARC in exchange for an honest review.

Synopsis: A pulse-pounding psychological thriller based on the popular Dutch tradition of blindfolding teens and pre-teens and dropping them in the middle of a forest—and what happens when it goes horribly wrong.

Twelve-year-old Karin is blindfolded and dropped into the Hoge Veluwe National Forest with three other children. With nothing but a few basic supplies and emergency food, the children are tasked with working together to navigate one of the Netherlands’ most beautiful and wild locations and return to where their families are anxiously waiting.

Karin quickly finds herself at odds with two of the older teens, and suddenly looks up to see that the other children have vanished. As Karin struggles against the elements to find her way back, she soon realizes that something far more sinister lurks in the woods.

Grace, Karin’s mother,and an American married to a Dutch husband, has been nervous about this practice from the start. At first she tells herself that the space is good for her daughter, but as the hours begin to tick by and the children fail to arrive at their designated campsite, she becomes certain that something has gone horribly wrong.

As Karin fights for survival, and Grace hastens to find her daughter, the night culminates in the reveal of a deadly secret—and a shocking confrontation—that will push each of them to her edge. (Goodreads)

As you can see in the synopsis, You’ll Thank Me Later is based on the Dutch tradition of “dropping,” in which groups of pre-teens are left in the woods, where they have to work together to find their way out. Here’s a 2019 New York Times article which tells more about it.

Admittedly my first reaction was: “Are they crazy? Oh my God! How can they blindfold their babies and desert them in the woods? What kind of horrible parents would do that?” However, that reaction is coming from my deep belief in Murphy’s Law, and the pretty much irrefutable fact that if anything can go wrong, it will. Then I started reading more about it and learned that the UK has a right of passage called the Duke of Edinburgh Award, and even the Boy Scouts of America have sponsored similar outings. And I do understand the purpose behind these: Cooperation, self reliance, etc.

After finishing this book though, I say again Murphy’s Law people! The story itself is a quick one at a little over 256 pages. I liked the main characters Karin and her mother, Grace, and the chapters alternate between the two of them. The mystery certainly kept me guessing almost right up until the end. My biggest issue concerns the dialogue which often comes across as stilted and rather awkward, which is surprising as the author is American. Overall though, I found You’ll Thank Me For This an entertaining read that I easily finished in under two hours.

John Liming Is An Eccentric Opinion Writer At Large And An Often Fairly Offensive Shock Jock In Heart. You Have Been Warned!

John Liming Is An Eccentric Opinion Writer At Large And An Often Fairly Offensive Shock Jock In Heart. You Have Been Warned!