Yesterday and today mark the 100th Anniversary of The Tulsa Race Massacre, one of the darkest periods of American history, and one that was largely ignored for decades. Jill has put together this informative post detailing the horrific events as well as providing additional links for more information. This is something everyone should read and never forget!

Jolly Monday will be along later today, but for this morning I have something of importance to talk about.

Today and tomorrow mark the 100th anniversary of the Tulsa Race Massacre, one of the darkest two-day periods in the history of the United States.

In 1921, there was a 35 square block district of Tulsa, Oklahoma, often referred to as Black Wall Street, known as one of the most prosperous Black communities in the nation.  Greenwood boasted restaurants, grocery stores, churches, a hospital, a savings and loan, a post office, three hotels, jewelry and clothing stores, two movie theaters, a library, pool halls, a bus and cab service, a highly regarded school system, six private airplanes and two Black newspapers.

But there was resentment among the white people in Tulsa and in the words of one scholar, Tulsa was a tinderbox just waiting for the spark.  That spark came… 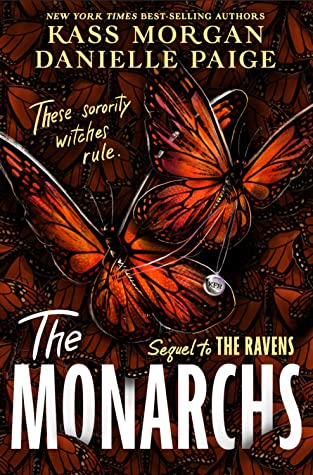 Thanks to NetGalley and HMH Books for Young Readers for providing an eARC in exchange for an honest review.

Synopsis: In this thrilling conclusion to New York Times best-selling authors Kass Morgan and Danielle Paige’s The Ravens, the sorority witches are tested when a rival threatens to usurp their place on campus and the forces of hell come knocking on their door.

The sorority girls at Kappa Rho Nu—the Ravens—are determined to restore balance to the world. After destroying an ancient talisman and barely saving their sorority in the process, they’ll go to any lengths to keep their secret as Westerly’s most powerful coven of witches.

Scarlett Winter, a legacy Raven, has finally gotten what she’s always wanted: the Kappa Rho Nu presidency. After the disaster that killed the sorority’s last president, Scarlett is determined that no sister will fall under the sway of wicked magic ever again. But the powers of the presidency have their own pitfalls—and Scarlett has big shoes to fill.

Vivi Devereaux, a freshman, finally knows what it feels like to belong. For the first time ever, she’s got it all: her Kappa Rho Nu sisters and a sweet (and hot) boyfriend. When Scarlett assigns Vivi the coveted role of social chair, Vivi is determined to live up to her Big’s expectations—even if that means dabbling in a new form of magic.

Unbeknownst to the Ravens, new rivals and ancient evils lurk on Westerly’s campus. With Kappa Rho Nu’s future on their shoulders and their pasts still haunting them, will Scarlett and Vivi be able to save their sisterhood once again? (Goodreads)

The Monarchs has a couple of minor hiccups, but is an ultimately entertaining and satisfying conclusion to The Ravens duology.

Picking up where The Ravens left off, both Scarlett and Vivi are still dealing with the aftershocks of the shocking betrayal by one of their friends which resulted in two deaths. Adding to the trauma of this are the self-doubts that continue to plague them. Scarlett is desperately trying to live up to her family’s legacy, and Vivi is trying to prove that she is a powerful witch in her own right. Unfortunately, it’s both girls’ insecurities that almost bring down their entire sisterhood.

In The Ravens, it was Scarlett who I initially had trouble connecting with due to her cold and stand-offish personality. In the end that turned out to be a mask she wore in public in order to hide her vulnerability. In this sequel I liked her much more as she struggles to prove herself worthy as the president and protector of Kappa Rho Nu. Her romance with Jackson definitely hits a rough patch due to actions she took at the end of the first book, as well as from circumstances beyond her control, but in the end, while they don’t exactly walk off into the sunset together, there’s a rapprochement between the two of them which leads one to hope that they will stay together.

Vivi, for me, was the biggest disappointment. I loved her in the opening book, but here she just annoyed me terribly as she repeatedly made immature and frankly, idiotic decisions. I tried to have sympathy for her as she was dealing with multiple issues, but by the time I had reached the halfway point, I was ready to wash my hands of her. The romance between her and Mason, while initially strong, winds up fizzling into the background here as Vivi pushes him aside in her quest to prove herself. Thankfully she does redeem herself in the end, but overall she’s the weakest link in the story.

The plot itself does an excellent job at further developing this magical world, and introduces a new although somewhat predictable villain. Once again, there are no easy way outs, and sacrifices have to be made in order to defeat this new evil. The story unfolds at a brisk pace from the very beginning to the conclusion that happily leaves no loose ends.

There’s no doubt in my mind that The Monarchs will please readers who enjoyed The Ravens. It’s definitely not a standalone though, so if you’re interested in reading this, I advise you pick up its predecessor first. Otherwise, after reading and enjoying both books in this duology, I’m hoping this isn’t the last collaboration between Kass Morgan and Danielle Paige as I feel they make a formidable writing team.