While thousands of people continue to die in the U.S., the Toddler-In-Chief has been a busy boy on Twitter, attacking football teams for considering name changes due to racist connotations, and unbelievably insinuating that NASCAR driver Bubba Wallace perpetrated a hoax after a “car pull” that bore a remarkable resemblance to a noose was found hanging in his team’s Talladega SuperSpeedway garage last month. 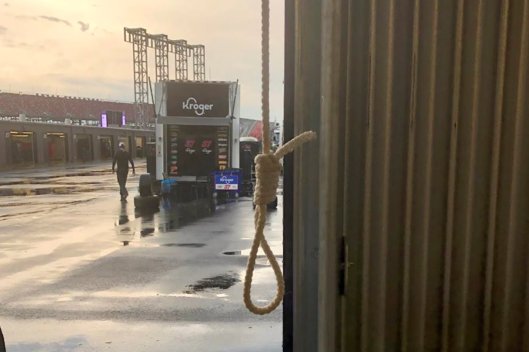 While there’s still a mystery regarding who hung it, the FBI concluded that it’s been there last fall, and it wasn’t a hate message directed at Mr. Wallace. No where in their report did they accuse him or anyone else of a hoax. However, Trump, never one to let an opportunity go by to send a dog whistle to those supporters who are racist, had to send this out. 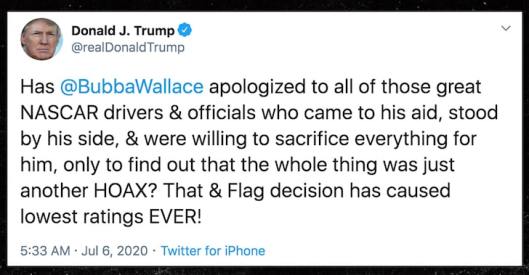 And here’s Bubba’s classy reply who he addressed To the next generation and little ones who follow my footsteps. 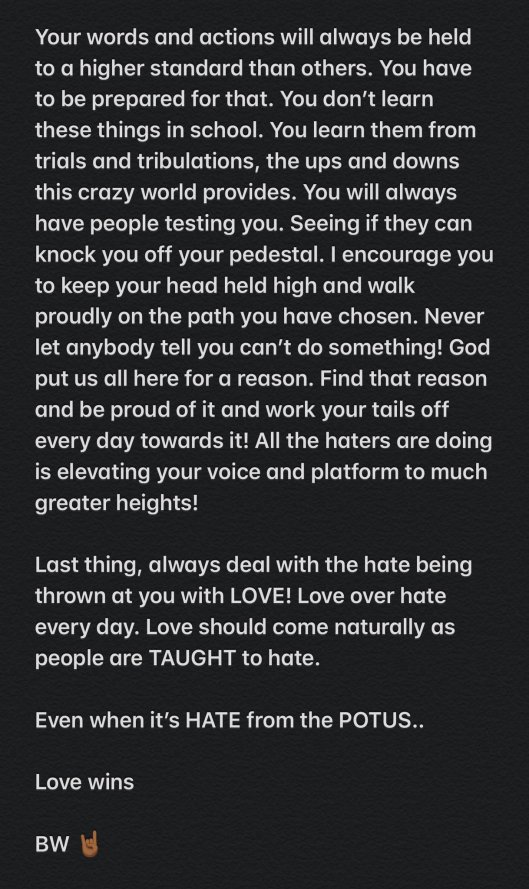 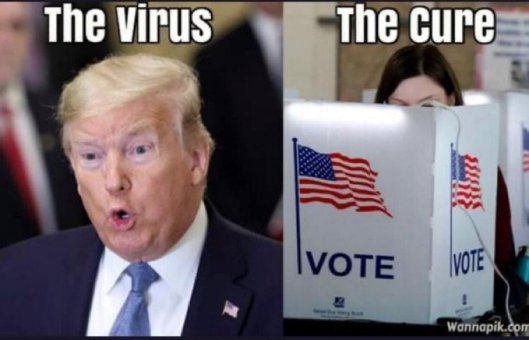 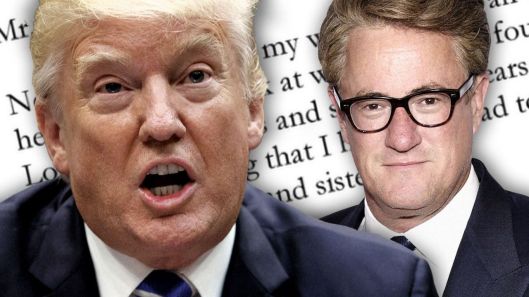 While the number of people who have died from Covid-19 aproaches 100,000, Mr. Trump has been occupied with more pressing matters. In addition to mocking his likely opponent, Joe Biden, for doing the responsible thing and wearing a mask in public, the Dear Leader has been a busy boy the last few days tweeting out conspiracy theories and disproven accusations against MSNBC host and former congressman Joe Scarborough. Mr. Trump has hurt feelings because his former friend has turned against him. Unfortunately, he’s putting an innocent family through hell in his deranged quest for revenge. 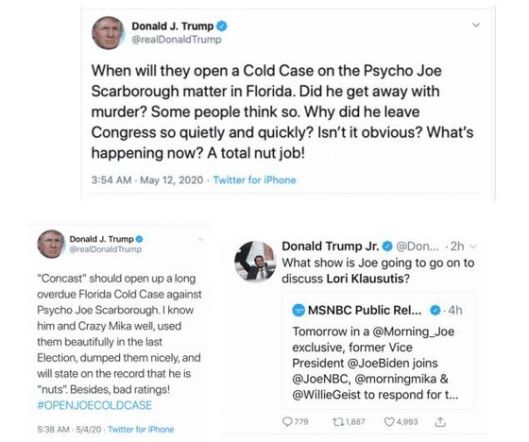 For those not familiar with the story, in 2001, Lori Klausutis, died while working in Scarborough’s Florida congressional office. Medical authorities quickly determined that she had an undiagnosed heart condition which caused her to faint and hit her head on the corner of her desk. This was a tragedy, especially as she was only 28-years-old. However, Scarborough was in Washington at the time, Lori had told friends that she wasn’t feeling well, and authorities determined no foul play had occurred. 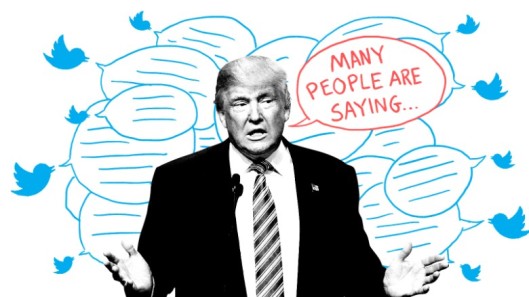 Mr. Trump has periodically tweeted out his thoughts about this heinous conspiracy theory for the last three years, since the once friendly relationship between himself and Scarborough soured, but over the last several days his attahave intensified. So much so, that Lori’s husband wrote to Jack Dorsey, CEO of Twitter, out of sheer desperation. 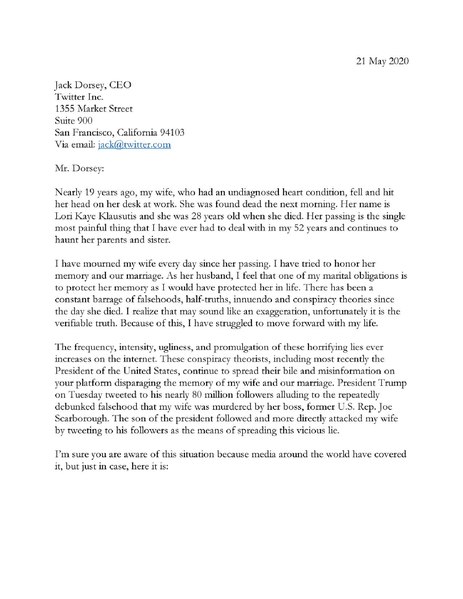 We are deeply sorry about the pain these statements, and the attention they are drawing, are causing the family. We’ve been working to expand existing product features and policies so we can more effectively address things like this going forward, and we hope to have those changes in place shortly.

In other words, Twitter is continuing to treat Trump’s garbage tweets as important historical missives, no matter who they hurt. This is pathetic and unacceptable.

This morning Mr. Trump took time from his busy schedule of gutting the Affordable Care Act, taking away free access to contraceptives for millions of women, playing chicken with North Korea and now Iran, first insulting and then throwing rolls of paper towels at hurricane victims in Puerto Rico, attacking sports players for exercising their First Amendment rights, claiming credit for inventing the word “fake”, and basically sending us all back to the Dark Ages. Yes, with everything on his plate he took the time to tweet some barbs at fellow Republican, Senator Bob Corker who recently announced he would not be running again in 2018. Among several tweets were:

Senator Bob Corker “begged” me to endorse him for re-election in Tennessee. I said “NO” and he dropped out. (said he could not win without my endorsement.) He also wanted to be Secretary of State, I said “NO THANKS.” He is also largely responsible for the horrendous Iran Deal!

…Hence, I would fully expect Corker to be a negative voice and stand in the way of our great agenda. Didn’t have the guts to run!

Yeah. It kind of just leaves you speechless, doesn’t it? Although I do have to give him points for using the word “Hence” in the proper context. But wait! It gets better! Senator Corker, who admittedly has not been hesitant to speak up when he disagrees with Mr. Trump, had a reply of his own:

It’s a shame the White House has become an adult day care center. Someone obviously missed their shift this morning.

C’mon, admit it. This is something most of us have been thinking if not saying since January! So while I may not have agreed politically with Senator Corker in the past, right now he’s a hero to me for not becoming another one of Mr. Trump’s silent victims.

Oh, and while we still have our First Amendment rights (for now), I’m including this…again:

Before you read any further I want to warn you that this is going to be another one of my rants against Mr. Trump. If you choose to proceed, do so at your own risk!

So, after three days of Twitter tirades against “Fake Media” outlets such as CNN, the New York Times, and the Washington Post, Mr. Trump turned his ire on Joe Scarborough and Mika Brzezinski, hosts of the popular MSNBC talk show, Morning Joe. Now, I’m going to be upfront here and say I’m not a fan of the show or Joe and Mika. They’ve gone back and forth playing footsie with Mr. Trump, a little too much for my taste. Currently they seem to be on the outs with him again, which is apparently what provoked this latest outrageous tweet:

While Scarborough didn’t escape completely unscathed from the juvenile name calling, Mr. Trump saved the most personal, vulgar and coarse attack for Brzezinski. During a week filled with things that actually matter such as the Senate’s  attempt to pass a healthcare bill which will leave at least 22 million people without insurance, the implementation tonight of parts of the equally appalling Muslim Ban, and refusing to discuss possible protections in place against further Russia interference in our elections, Mr. Trump apparently has enough time on his hands to launch a disgusting and sexist attack against yet another woman. Not only is this nauseating, but it’s embarrassing for us as a country that our so-called leader persists in these types of personal attacks. First Lady Melania Trump defended him this morning, saying through her spokeswoman:

As the First Lady has stated publicly in the past, when her husband gets attacked, he will punch back 10 times harder.

Huh. So Mrs. Trump. How is your chosen platform against cyber-bullying coming together?

It seems that Mr. Trump sees Morning Joe’s criticism of him, including questioning his mental health as a personal betrayal. But here’s the rub. When you are a world leader, you need to expect criticism against yourself and your policies if you respond, you do so with maturity and aplomb. Heck, Mr. Trump was, and still is, one of President Obama’s biggest, nastiest hecklers. I’m not defending attacks from Madonna, who commented how she’d like to blow up the White House, or Kathy Griffin who for some demented reason thought it was a good idea to pose with a fake and bloody decapitated head of Mr. Trump, or Johnny Depp who “jokingly” asked fans in Glastonbury how long it’s been since an actor assassinated a president. Obviously all three of these celebrities crossed the line. However, in no way does this excuse Mr. Trump’s misogynistic and vitriolic behavior.

I suppose it’s clear that for at least the next 3 1/2 years that in between his weekly golf games, we can all look forward to more obscene Twitter tantrums, the gutting of agencies like the Education Department, the Centers for Disease Control, and the Environmental Protection Agency and trampling on people’s rights and his embarrassing us on the world stage.

I could go on about things like his further destabilization of the Middle East by sending mixed messages regarding Qatar, who currently hosts the largest contingent of our military in the region, but I believe I’d better stop now. I’m going to just finish by saying once again, to not only my American followers but also to my international ones:

WE ARE BETTER THAN THAN THIS!

We need to seriously examine who we want to represent us and be the chief lawmakers in this country not only in next year’s elections, but also in 2020. Mr. Trump is already raising money and holding campaign rallies. Do we really want another four years of someone who is a misogynist as well as racist, bigoted, impulsive, unstable, and is only concerned with looking out for himself? There’s really only one answer.

*I know I’ve used the above gif a few times before, but it makes me happy, so I hope you’ll forgive me.*

ShiraDest: Education, Cooperation, and The 4 Freedoms for ALL Human Beings

Thoroughly reviewing Old TV Shows, Movies, and Books Before You Forget Them

“We shall not cease from exploration and the end of all our exploring will be to arrive where we started and know the place for the first time.” (T.S. Eliot)

If adventures do not befall a young lady in her own village, she must seek them abroad - Jane Austin

Diary of a Gay Dad. I am a full time dad to five young children.

ShiraDest: Education, Cooperation, and The 4 Freedoms for ALL Human Beings