As many are already aware, yesterday afternoon Mr. Trump gave a press conference in the lobby of Trump Towers in New York City. Originally it was supposed to be focused on the administration’s infrastructure plans, but it quickly went off the rails due to Trump’s unhinged remarks and behavior. I’m not going to parse every abomination that came out of his mouth, as I suspect most of you have already seen the presser or read about it. You already know that instead of doing the right thing and unequivocally repudiating white nationalists and neo-Nazis, he made excuses for them and condemned what he called the “alt-left”, saying they were equally to blame for the violence in Charlottesville over the weekend. Insisting that some of the alt-right that descended upon this small quiet college town were “fine people” who were there to quietly protest the removal of Confederate statues, he pointed out the “peaceful” protests of Friday night on the  University of Virginia campus.

These “fine people” mobbed the campus, holding Tiki torches and surrounded a small group of college students. Giving Nazi salutes, they also chanted “blood and soil”, a well-known Nazi slogan, and “Jews will not replace us.” They came armed with long guns and clubs, and wore swastikas on their clothing and brandished shields. Those attending were primarily hate groups identified by the Southern Poverty Law Center, and included:

The Ku Klux Klan, which obviously needs no introduction. 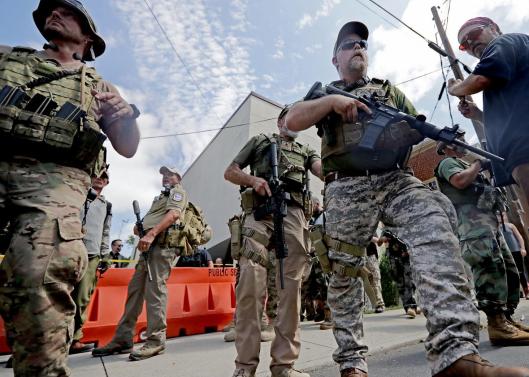 I could keep going, but I’m getting sick to my stomach just thinking about it. Needless to say, these weren’t “fine people”. And anyone who was part of the “Unite the Right” rally but wasn’t one of these hate groups was just as complicit. Were there counter-protesters who met violence with violence? Yes. But to equate these two sides is not only the height of lunacy and ignorance, it’s dangerous. Immediately after his remarks, white supremacists like David Duke and Richard Spencer were thanking Mr. Trump for his remarks. In the space of twenty-minutes Mr. Trump thoughtlessly poured gasoline on the long-simmering tensions of race and religion in this country. But that’s okay because he was able to brag about his Charlottesville winery, and the thank you he received from Susan Bro, the mother of Heather Heyer. The thank you that was in response to his finally, albeit reluctantly condemning white supremacist hate groups on Monday.

Am I outraged? You bet I am!

I’m outraged that I never got to meet some of my mother’s family because they were killed by Hitler and his Nazis, but there is still rampant anti-Semitism in this country.

I’m outraged that people in the U.S. have cause to be fearful due to their race, religion, and sexuality.

I’m outraged that there are so many people who are willing to turn a blind eye to the hate that’s so prevalent.

I’m outraged that the majority of Republican politicians continue to put Party before country.

I’m outraged that we have a narcissistic President who is so clearly demented, and is tearing apart our country, yet seems to be unstoppable.

And finally, I’m outraged that 32 year-old Heather Heyer was viciously murdered because she was standing up to hate.

America is at a tipping point right now. We can bury our heads and hope that things blow over, or we can speak out and make our voices heard. And with that I’m going to leave you with the wise words of Civil Rights pioneer, Congressman John Lewis.

If you see something that is not right, not fair, not just, you have the moral obligation to do something about it.

Thanks to NetGalley and St. Martin’s Griffin for providing an eARC in exchange for an honest review.

Synopsis: Birdie never meant to be at the party. Bash should have been long gone. But when they meet, a collision course is set off they may never recover from.

Sebastian Alvarez is just trying to hold the pieces together: to not flunk our, to keep his sort-of-best friend Wild Kyle from going something really bad, and to see his beloved Ma through chemo. But then he meets Birdie Paxton, a near-Valedictorian who doesn’t realize she’s smoking hot in her science pun T-shirt, at a party, an undeniable attraction sparks. But before they are able to exchange numbers, they are pulled apart. A horrifying tragedy soon links Birdie and Bash together–but neither knows it. When they finally reconnect, and are starting to fall–hard–the events of the tragedy unfold, changing both their lives in ways they can never undo. Told in alternating perspectives, The Inevitable Collision of Birdie & Bash by Candace Granger is a beautiful, complex, and ultimately hopeful teen novel that will move you to the very last page.

I have to admit that The Inevitable Collision of Birdie & Bash was a 100% impulse request. But honestly! Between the cover and the quirky title, can you blame me? I don’t read a lot of contemporary YA Fiction, but this caught my eye and I’m so glad it did!

As always, I’m not going to include any spoilers. Suffice it to say a tragedy occurs near the beginning of the book that links Birdie and Bash, although Birdie isn’t aware of the connection. Things get even more complicated as they both start working at a rollerskating rink, with Bash struggling with the secret he’s hiding.

Birdie is such an awesome character. She’s intelligent and cracks math jokes. She’s also pretty sassy and her ability to recite random facts provides some much needed comic relief. After the tragedy, she struggles with guilt which lends her a certain vulnerability. She’s extremely likable and believable.

And Bash just broke my heart on so many occasions. He’s a good kid who is struggling with the impending death of his mother. He tries to forget what is happening, but it overshadows his every move. He’s the type of teen who takes responsibility for everything, even something that’s not his fault. He tries so desperately to keep his life together, that I kept wanting to reach into the book and give him a hug.

The plot is very fast-paced, and filled with beautiful imagery. The ending is perfect and is one of those that will leave you sighing with complete satisfaction as you close the book.

The Inevitable Collision of Birdie & Bash is an amazing and unforgettable debut by Candace Granger. It’s a breathtaking story of love, family, and friendship that will make you laugh and also tear up at times, and is perfect for fans of John Green, Rainbow Rowell, and Nicole Yoon. It’s a delightful rollercoaster of a book that will put readers through through the ringer and invites debate over destiny and fate. I usually delete eARCS from my Kindle once I’ve read them but this one I’m going to keep because I have a feeling I’m going to want to read it again.